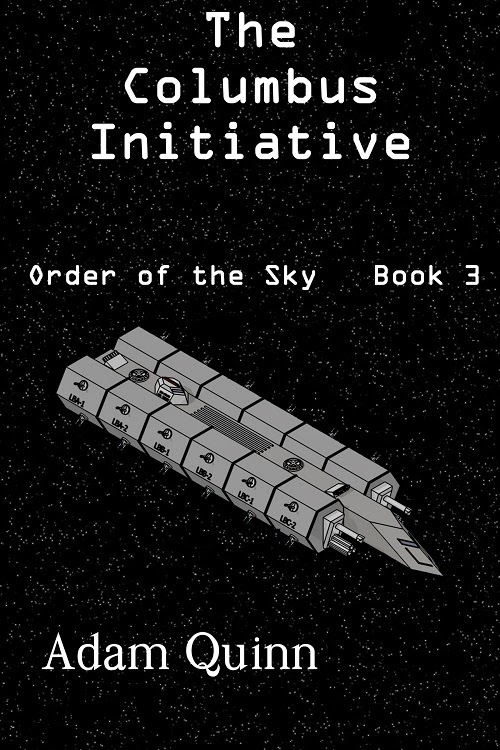 Order of the Sky (Book 3)
by Adam Quinn (aka Dark Omen)
Even as the fledgling Galactic Resistance prepares for an all-out revolution, a dark government secret comes to light that has the potential to shape the future of the galaxy.

All Adam’s books on Smashwords, Barnes and Noble
available in ebook and print
Adam Quinn is the son of Emblazoner Susan Kaye Quinn.
My son, Adam Quinn, is fifteen years old and has written three novels, a novella, and is currently working on his next novella. He seriously puts his mother to shame in the Early Potential Unlocked category.

Click here to check out Adam’s author website, where he talks about the Columbus Initiative being his longest novel (100k), the strategy board game Resistance Rising he made to go with the book, and finally an analysis (complete with charts) of the wordcount and statistics, including charts like this:

Be still, my geeky heart.

He also has analyses of the number of female characters in each book of his trilogy, the relative “inquisitiveness” of various characters (Xasked/Xsaid), and the causes of death of his characters vs. in real-life in the US.

Also check out this interview with Adam from his previous release of his novella Project Exibluar, and this post on publishing your kid’s work from when he released his novel Undercover War.

To say I’m proud of him is a serious understatement. In each novel, I can see Adam’s growth as a young person and as a writer – is there any greater gift for a mother? But these are books that more than his mother can appreciate – his brothers Mighty Mite and Worm Burner are by far his biggest fans, gobbling up Book 3 during our Canadian vacation and debating the finer worldbuilding points with him, turning into beta readers in their own right.

And the books are flat-out entertaining. Here’s a snippet to give you an idea of what I mean…

“Done.” Aidan stood and disconnected his OWC from the computers. “We now have operational control over most of the base’s systems, including the starship entrance, and I have the profiles of all active Dark Cult cells in the galaxy on my OWC. Let’s get out of this place.”

“The same way we got in,” Aidan said.

The battleship GGS Buttercup and its fleet disengaged their flip drives, returning to the third dimension from the seventh, where superluminal travel was possible. Their reentry into the third dimension presented GG Commander Mantradome with a picturesque view of Sambourloin—a soft green and blue orb in the star-speckled void. She cupped her hands around it and imagined what it would look like in splotchy shades of black and gray, perhaps with some seams of brilliant red if Sambourloin was a Tectonic planet—she made a mental note to look up if it was.

Most times the GG offered her a special assignment that took her away from her day job of hunting down and killing pirates, she vehemently refused, but this time was different. They had offered her a chance to paint an entire planet of pirate-loving scum with her favorite colors! There were rumors on Galactica that she had gotten the job because the GG’s other top admirals had moral qualms about the operation, but she didn’t put too much stock in that—back in the day, people had “moral qualms” about strip-mining Jorkuun, but that worked out great for the economy! Besides, the GG had been mostly peaceful for thousands of years, so as the head of the Anti-Piracy Division, she had more combat experience than most in the military.

“Uh, Commander?” an officer said. “Would you like us to set up the bombardment stations? Or…just stay here?”

“Yes!” Mantradome said. “Clearly! You should have started setting them up as soon as we flipped in, you idiots!”

“But, Commander, you airlock everyone who does things that you don’t explicitly tell them to,” the officer said.

Mantradome motioned to the two troopers at the back of the bridge. “Airlock him!”

The troopers seized him and dragged him away.

Adam writes hilarious middle grade fiction that any young (or old) fan of Star Wars would enjoy, with strong female characters that make his mom proud. If you have kids, I encourage them to check out his books and see what a young writer is capable of, if they put in the time to finish a work, revise, and polish it.

An elite government force crosses the galaxy in pursuit of an evil underground cult and discovers the Galactic Government they serve is filled with treachery.
get the series here

After escaping the destruction of a mysterious prison-like facility without a memory to his name, ExibluarX must contend with the malevolent legacy of his unknown past and decide whether to pursue it or to forge his own course.
get the novella here